In my experience, most of the energy and activity that happens in innovation initiatives is focused around getting ideas. but ideas do not deliver value until they are implemented. Often, organisations don’t focus effort on the execution of ideas until they have them. As a result, many ideas fail and are never used.

To overcome this, the outcome wanted before asking for ideas must be clear. Consider what is actually needed and what resources are available. If you only have the ability or resource to implement a few ideas, make this clear at the start; otherwise you could annoy some very engaged people!

Beginning with a clear idea of the desired outcome can substantially improve success. If I enter a prize draw, I expect to know how many winning tickets there are; it’s the same for innovation. Communicate the outcomes to your audience so they know the rules. However, even when you know what outcome you want, implementation is still hard work, as you are trying to change the status quo.

So, here are five tips to help increase your chances of idea implementation. 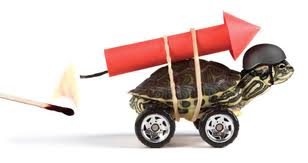 1. Start Small and Prove the Concept
So often we want to tell everyone about our great idea, but you know what? Not everyone wants to hear it. And if they do hear about it, they start to worry about the effect it could have. They force lots of reporting and discussions on you, completely taking away any time or enthusiasm that you once had for the idea. As a result, the idea withers and dies.

If you know that your idea will make a positive change, why don’t you just do it? Start in your team and prove the concept. If it doesn’t work, hey, you tried. However, if it works out, you have proven the concept and it is ready to “go large.”

Booz & Company, in their report “Making Ideas Work: the Global Innovation 1000,” stated that “smaller companies believe they are more effective at converting ideas, as organisational issues tend to be less complex and ultimately less bureaucratic.” It’s the same for teams within a large organisation; you need to fly under the radar!

2. Find Innovation Heroes
There are people out there that just love innovation — new ideas, concepts and ways to bring about change — and they love trying to make them happen. You need to tap into their bravery to take ideas forward. Nothing is too difficult for them; they want to be the “hero.” By acknowledging their enthusiasm, you give them an “official” role and badge, demonstrating how important these individuals are to the business.

3. Share the Credit
I love this concept, but you have to be willing to let go of your ego. If you share the credit for the idea with someone more senior, and everyone loves it, you have made it very hard for that senior person to kill “their” brilliant idea! So while you may not get the full credit you deserve, the idea is on the road to being implemented with strong sponsorship. Which is more important?

4. Protect Fragile Ideas
The best idea does not always start out as brilliant. An idea has to be given time to grow, develop, and blossom. At Agilient Technologies, they talk about a “cloud of innovation” — a fragile collection of ideas that are nebulous in concept, but could become something bigger if combined in the right way. It is key is to find ways protect “fragile” ideas until they can combine with others.

Booz & Company say it best; “Serendipity will always play some part in the effort, and we’ve heard plenty of stories over the years about great ideas evolving out of chance meetings, sudden flashes of insight and sheer luck. Large companies, however, simply can’t depend on happenstance, and the most successful ones understand that clearly.”

5. Solve a Customer Pain Point
Finally, remember the driver of the idea: what it seeks to solve and achieve. This ensures that implementation of the idea remains at the top of the pile. “If [an idea] doesn’t relieve a particular customer pain point, then there is no compelling case to pull it through all the gates into production,” says Tana Utley, CTO of Caterpillar, Inc. “There is nothing like a powerful external market force to really drive an intense innovative environment. And there is nothing that drives creative energy like that feeling in the pit of your stomach when you have a goal that you have to achieve and it’s still pretty far away.”

Innovation is all about pushing current, known boundaries and working outside what is considered the norm. Not everyone succeeds in converting their ideas into reality, but with these tips, you’ll increase the likelihood of your innovation success.

NB: This article was first published on the Mindjet Conspire Blog.